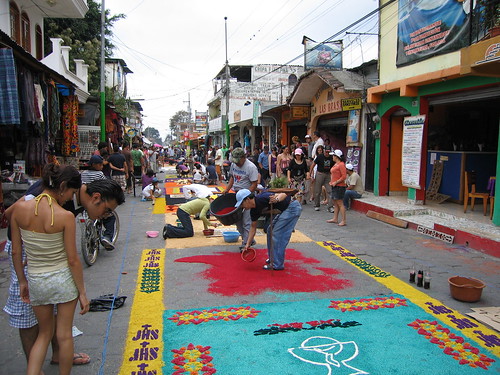 For me, one of the highlights of Central America was the making of the sawdust carpet. Now Sony has figured out a new way to add color to these ancient streets. Watch what happens when you put eight million flower petals into a volcano.

We must be approaching the End of Eternity.

Wikipedia: She does not deny it. Instead she tells Harlan that her people, who prefer to watch past time rather than travel in it or change it, discovered that Eternity was, in choosing safety for humanity, suppressing creativity. In the end this has the effect of denying humanity’s access to the stars, as alien species advance technologically and confine humanity to Earth. Eventually humanity will die out, millions of years in the future, leaving an empty Earth. However, if Eternity could be prevented from being created, humans would leave Earth and colonize the stars. Thus they cut themselves off from Eternity and began to plot its demise.

P.S. The last time I read Asimov was in high school. I thought of this book because he is watching Doctor Who.