If someone had asked me for a declaration of life goals ten years ago when I graduated from university, I probably would have said something like this.

Two. Scoot around Rome or some other romantic European city.

So … ten years later … am I getting closer to these goals?

One. I don’t actually pick jobs to increases my chances of finding Nietzsche but somehow it worked out that way. As soon as I joined Milliman, I started asking people for book recommendations and was given the suggestion of Dynamic Hedging: Managing Vanilla and Exotic Options which I loved which led me to read other Taleb books. He does an amazing job explaining Nietzsche. But more than that, experiencing the 2008 financial crisis made me realize my work should not be about trying to control chaos but trying to benefit from chaos. Then, in 2012, I actually found Nietzsche. In conclusion, I’m giving myself a rating of “so far so good”. Although a part of me thinks that I’ve actually never really truly confronted the chaotic. Hard to say whether I really get it until that happens.

Two. I still don’t have a driver’s license. But it’s okay because, in 2010, I realized that I actually enjoy riding a bike up and down hills. And nothing is more romantic than realizing that a flood has covered the original route and a new one must be found. 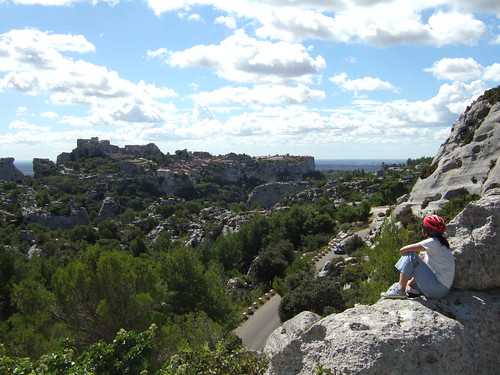 Gazing at Les Baux-de-Provence
a.k.a. taking a break after realizing that I’m not there yet

A pictorial approach based on feeling, sensation and memory, trace and disappearance is a great way to describe Turner. It’s way too early to say what my favorite film of 2015 will be but Mr. Turner had quite an effect on me. Looking at the man’s life from the outside shows the opposite of beauty. He is a strange looking fellow. His is estranged from his ex and children. His communication style is baffling. At the beginning of the film, when he sings (not so well) and brings tears to the woman playing the piano, I was like … I don’t understand why this is so moving. At the end of the film, as he lies there dying, I found myself thinking … he is so wonderful … don’t let him go. And I can’t even pinpoint exactly what happens between the beginning and the end that makes me so attached to this character.

If someone asks me for a declaration of life goals today, should I say encounter the unexpectedly interesting? Or find the key to chaos? Do such goals even make sense? Probably the best goal I can set is the one my piano teacher gave me long ago: once more with feeling.

2 thoughts on “Mr. Turner & my new goal in life: once more with feeling”